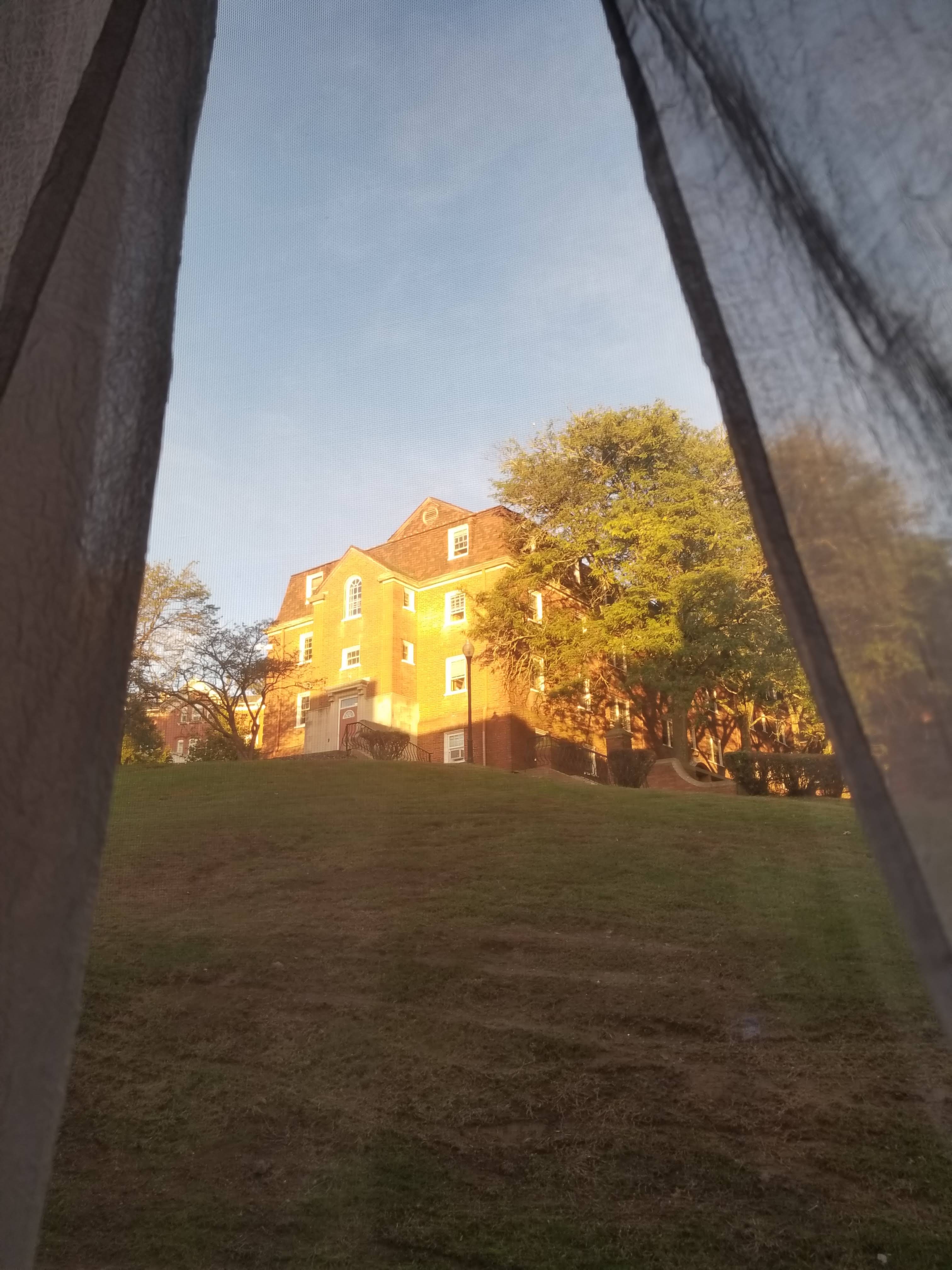 Sunshine spilled past lace curtain as a melody sweetly sung softly in the distance. The woman felt the light collecting in her room through closed eyelids, dancing with the aroma of coffee in her brewer. Slowly, the woman guided one leg off the bed, wiggling her toes, and feeling the hardwood floor and the comforter that escaped her in the thick of night. She spread her fingers over the untouched side of the bed as if it were unventured territory. It was cold. The song on the stereo suddenly sounded melancholic. Her pajama pants lightly swished around her ankles as she wrapped her remaining blanket around her shoulders with a distinctive sovereign air.

“Morning,” she yawned, drifting through the threshold of her apartment. She padded over to pet Luna who stationed herself lounging on her usual perch of the windowsill, warming herself with the sunlight. “Seems like it’s going to be just us now.” The woman picked up Luna and brought her face to face and said, “I’m too young to go crazy, right? What do I do now?” Luna seemed bored at the prospect of waiting for the woman to come up with her own answer, so the woman to woman moment was cut off by the cat’s apathetic squirming. Despite the woman’s early-morning poignancy today, the Balinese cat always basked in any attention, and when satisfied, sent the woman away to breakfast with a flick of her tail. The woman collected her favorite giraffe mug for her daily dose. Coffee poured, she leaned back on the kitchen counter to survey her matriarchy. It was the first time that her small apartment appeared empty. Sighing, careful not to step on any library books, she danced her way over to her nook built on the ground assembled from the side of the couch and a few mismatched throw blankets. She borrowed a lot of books to page through when work got quiet — well, quieter than the standard library quiet.

She sat for a long time, watching the sunlight creep across the floorboards. Other mornings, she’d hear the soft guitar drifting in from the bedroom. Now, she could hear only the jazz music from the stereo and her neighbor’s dog scratching away at their door. She couldn’t pick anything better, he only left one CD when he accidentally dropped it behind the nightstand and promised that he’d “get that in the next box.” It was a beautiful piece, maybe too romantic for the morning, but Glenn Miller’s Moonlight Serenade was the only one she found too beautiful to cry too on the disk. It deserved the silence of full, rapt attention.

And he never even came back for the next box.

She put the music on last night and fell asleep numb, high, and definitely dehydrated. Maybe the coffee wasn’t the best choice after all. She sat and sat, eyes wandering, drifting to the motion of the sea after a hurricane.

He left in a hurry last night, almost stumbling over his own feet while grabbing his guitar and suitcase, to get out. Saying something about needing to get out and a last minute international flight out, “maybe Europe, I don’t know.” He mentioned some French girl that swept him off his feet in the pub down the street, and he was going to find her “because she had eyes like no other. I’d be an idiot to leave a mystery like that left unraveled in the world.” The woman doesn’t know either, but she stopped listening after, “I don’t think I’ve ever loved or felt loved before. And I think it’s about time that I found out what’s so good about it.”

Not that the woman ever thought that she loved him. They were just roommates who were pitted together by the universe in a one-bedroom studio apartment. They got along from the moment they met, so later that fateful day, they split the rent, moved-in their measly belongings, and got Chinese takeout and cheap champagne to celebrate being independent for the first time.

They never brought anyone home, always washed their own dishes, and would always cook two servings to share. They were both bad cooks, so there was a lot of trial, error, and dirty dishes. It was never dull, just symbiotic. He’d play music, and she’d write poetry. They’d go to whatever odd day job they’d have at the time, come home, summarize it in one bad pun, and went about their evenings.

Luna padded over and gently sniffed at the coffee. The woman nudged it an inch away, far enough to dishearten the beast. A few months into the roommates’ quiet lifestyle, he came home one night, bag on shoulder and apron in hand, and he suggested that they should get a cat, and to her own surprise, she nodded. He turned away, then guiltily pulled a small kitten from his backpack. He found her alone, tossed in a box in the middle of a parking lot. He explained how the kitten’s eyes begged, and he couldn’t leave something with eyes that beautiful and longing out in the autumn cold. The woman stared at the furry stranger, then back at him whose expression was that of a man seeking forgiveness from the ruthless gods. Surprising herself again, she only laughed.

He left in a whirlwind, and she only sat calmly in the eye of the storm. It was after the storm passed and he left that she knew that she did love him. However, their quiet love for each other turned out to be too quiet. She never told him how much she appreciated him being there to come home to every day for the past year.

She never thought that she needed to.

They broke bread together, they owned a cat together, and, as tall as they are, even bought and shared a Cal King bed together. They shared their rent together, their poverty together. They were both abandoned by their blood, alone in the streets, scraping by, holding on to their art as the only therapist they could afford, and when they found each other, clung together in the storm that is New York City.

It was the only kind of love she ever knew.

After a lot of thinking and a long time, who knows how long, she sat up, reached her laptop on the coffee table, and fired up her email. “Hey, you,” she wrote in a new draft. “I’ve been thinking a lot about love. Let me tell you a little about it.” Luna looked at the woman, proud that she finally figured it out. She moved, laptop, blanket, and coffee to the kitchen counter, and continued.

“The idle mind is a dangerous place to be left in. I can’t say that I’m happy you left, but if you were unhappy, just don’t be idle. For me.

“The door is always open; you know where the spare key is.”

It was short and sweet, but the woman didn’t send it yet. She closed her laptop and went to make breakfast to attempt to process all of her remaining thoughts over eggs. The woman decided to shed no more tears. He went his way; she must go hers. It was a quiet Sunday morning, no more or no less soft than a usual Sunday morning, but resolve in mind, she made some phone calls to family friends who always offer her part-time work at their restaurant or law firm. She saw no need to waste time when she needed to come up with the other half of rent in the next few weeks. A few extra shifts at her own office wouldn’t hurt too. She’s had it worse.

She went into the bedroom to shut off Glenn Miller and noticed the sun rays were on their way out. The day has come and gone without a sound, the sun receding behind the skyline in a fiery blaze. She thought of how the sun rises every day, despite the last day which could be so easily filled with torment or triumph. The sun never stops falling, but more importantly, the sun never fails to rise again.

The woman paused thoughtfully and returned to her unsent email. She added one last line, just to tell him that she loved him for once, and off it whooshed into the mailbox of her recently-realized dearest friend.

“I would ride into the mouth of hell and back for you every day.”

It was dramatic, yes, but maybe he’ll know what she means by it. Perhaps she’ll wake up one day in a few weeks, months, years to hear that line in a song he writes her, playing on an acoustic guitar outside.

I still hide old wine in new bottles if "wine" was loves and "bottles" was bottles.
Read a Book Day