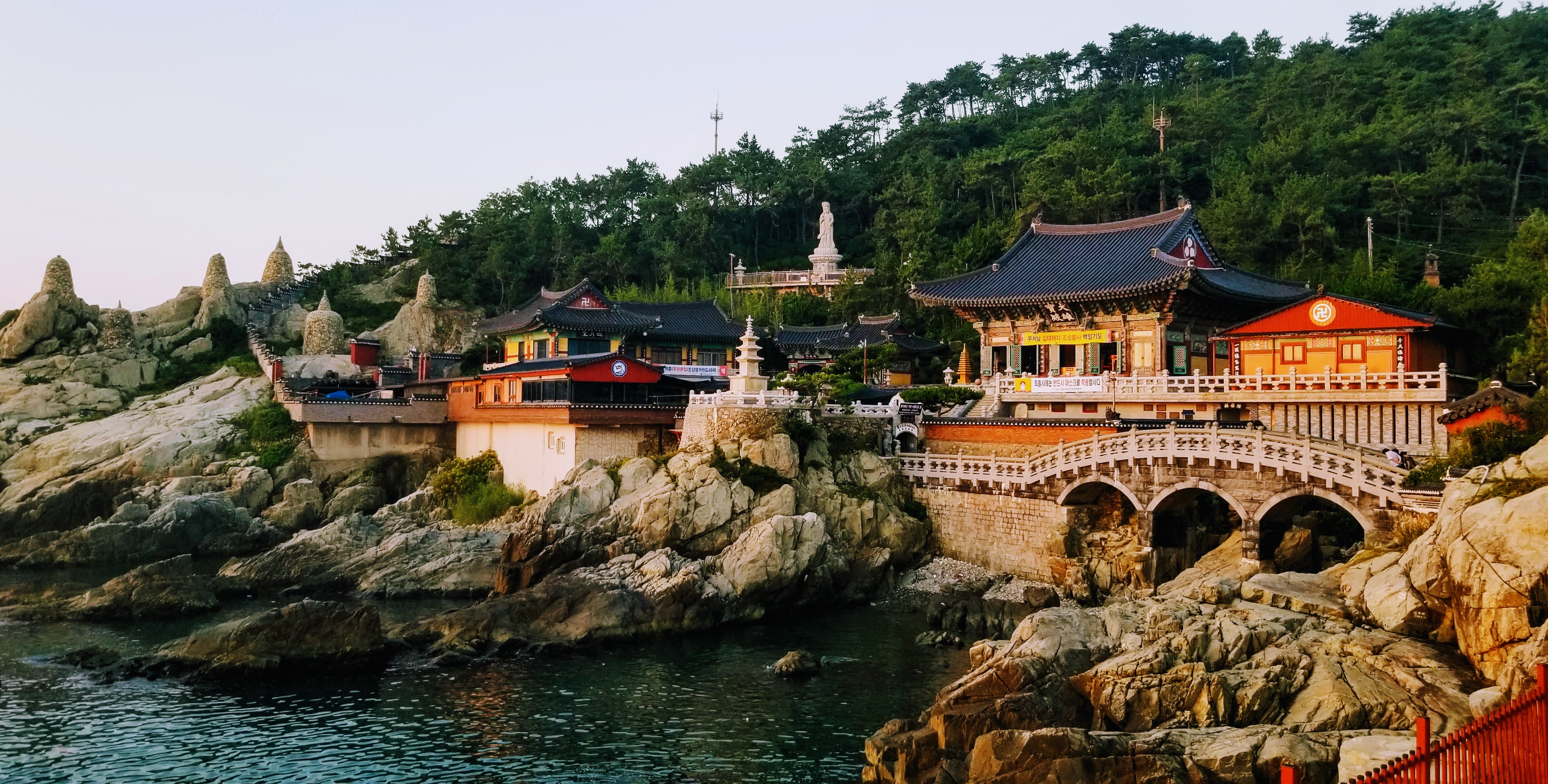 This will be in a few parts due to there being so much to do and see in Busan. Enjoy!

Based on these answers, you should be able to narrow it down.

Firstly, if you plan on:

And secondly, if you intend on spending:

How To Busan Map

To make it easier for you to choose where to stay in Busan, I have a map you can filter from types of sites (temples, food areas, shopping areas, historic and cultural sites, etc.) and color-coded for districts.

Here are some of the best places to stay in no particular order:

Yeongdo (literally “Yeong Island”) is one of the largest islands in Busan and lies just south of the city center and Busan Port. Staying right on the port offers a quintessentially Busan experience. There are almost always docked boats, the neighborhood is very local, and there is a nightly barbeque seafood market right on the harbor that not many tourists go to.

If you want a change of scenery, you just have to do walk across Yeongdo Bridge, which connects Yeongdo island to the mainland, to reach some of the city’s biggest attractions and street food markets in Nampo-dong and Gwangbok-dong (including Gukje Market, Jagalchi Fish Market, Nampo-dong Cultural and Fashion Street, BIFF Square, and more.)

This area is convenient access to major sights and transportation, but at night you can retreat across the bridge to Yeongdo in a very quiet and local neighborhood right on the port.

The views from Yeongdo looking toward Busan are phenomenally one-of-a-kind. There is nowhere else where you can combine the famed sights of the ginormous Jagalchi Fish Market, skyscraping Busan Tower, and the mountains of central and northern Busan, all in the same view.

This area boasts a high concentration of sites while only being 2 stops away from the KTX at Busan Station. These two neighborhoods are a food lover’s paradise. From noodles served by Korean grandmas sitting on the street on Gwangbokdong Food Street, famous Busan treats like 씨앗호떡 (ssiat hotteok) in BIFF square, market treats of Gukje Market, and more seafood than you could eat in a lifetime at Jagalchi Fish Market. At the iconic traditional markets, you can find everything you need from cheap eats to clothes to home goods.

The enormously popular Gamcheon Culture Village and Songdo Beach, with its cable car and Sky Cloud Trails and Red Bridge ocean walkways, are well within reach.

It may be a little difficult if you’re trying to see a few other key sights, notably Beomeosa Temple, Gwangalli Beach in Gwangan, Haeundae Beach, and Haedong Yonggungsa Temple that are at the complete opposite end of the city, so traveling there might be a trek.

South Korea is blessed with an amazing, nation-wide temple stay program. There are over 100 temples in the country offering temple stays, about 30 of which offer English programs.

Doing a temple stay is not so much a “relaxing” experience like a meditation or yoga retreat. It’s more of an educational experience, in which you will learn a lot about Korean Buddhist culture, interact and speak for hours with monks, and gain first-hand experience of what it would be like to be a monk in Korea. Activities include a temple tour, meditation, prostrations, vegan meals in silence, tea, chatting with monks, and waking up at 5:00 a.m.

How to book a temple stay at Beomeosa: Beomeosa temple stays are only offered on Saturday nights, and only some weekends are available. During temple events (including the weekends around the Buddha’s Birthday, a major national holiday in South Korea), there may be no temple stay program available.

Seomyeon 서면
for convenience to explore all areas of Busan.

Seomyeon as the central commercial district of Busan is perhaps the most convenient place to stay. It is the most central location with easy access to the rest of the city and a hip neighborhood with plenty of shopping options, restaurants, and bars for young travelers. It is upscale, energetic, and a great place to visit to take pictures of all the neon signs at night.

Seomyeon station connects subway Line 1 and Line 2, meaning you can ride the subway to the following places without changing trains: Nampo-dong, Jagalchi, PNU (Busan University Area), Kyungsung University Area, Gwangalli Beach, Shinsegae Department Store, Haeundae Beach, and Dongnae. You’d be about equally distant from all the major sights at the different edges of the city, and Seomyeon is the closest neighborhood to the airport and the shortest ride by public transportation.

Seomyeon is arguably the busiest area at night as it contains a large number of restaurants, cafes, shopping (above and underground), and bars. As Seomyeon is located on subway Line 1, those arriving via KTX or bus through Busan Station only have to travel 6 stops on the subway before arriving at Seomyeon Station.

Gwangalli Beach is probably the second most popular. It has more of a low-key city-by-the-sea vibe, with dozens of very inviting restaurants and pubs lining the seaside avenue, tall apartments and hotels facing the coast, and even a small, aging amusement park at one end. There are also many non-locals, dog walking, and access to the rentable Lime scooters.

Probably the best and most distinctive aspect of Gwangalli is the jaw-dropping view of Gwangan Bridge (also known as Diamond Bridge). At 7.4 kilometers, Gwangan Bridge is the second-longest bridge in Korea and the longest bi-level bridge over the ocean. The bridge runs parallel to the beach, and is quite an incredible sight any time of day, but especially when it is lit up with LED lights at night.

Gwangalli is also famous for a fireworks festival in autumn, but people like to set off fireworks from the beach year-round, and you can buy them from the convenience stores along the beach.

At night the bridge is lit up, it is convenient to buy seafood in Gwangalli and have a tent prepare and serve it to you.

Note that besides the slightly long subway ride from other parts of Busan, it’s a bit of a walk from the subway to the beach. Geumnyeongsan station is a shorter walk (5-10 minutes) and closer to the southern end of the beach, while from Gwangan station, a 10-15 minute walk will bring you to the northern end of the beach.

Both Shinsegae Department Store and Kyungsung University Area are only 3 stops away which is super convenient and Seomyeon is a little closer. Since there are many coffee shops to keep you satisfied, you can easily get a coffee and take in the glowing bridge at night. If you want to eat Korean food, there are more than enough restaurants to feed your cravings.

Haeundae 해운대
for the most famous beach & food, drinks, & hotels with an ocean view.

Haeundae is a bit removed from most of the other famous sights, but as South Korea’s most famous beach, this sight alone may be the reason you came. Haeundae is popular year-round, but especially in summer, when beach umbrellas seem to fill the entire beach. Haeundae features the city’s highest concentration of upscale luxury hotels, many of which feature amazing hot spring spas with unbeatable ocean views while still having many excellent budget choices too.

Besides the countless bars, cafés, restaurants, museums, art galleries, and other attractions in the neighborhood, you can also access nature by walking around Dongbaek Park, which was once an island, or going to see cherry blossoms on nearby Damaji road, in the season of course.

A disadvantage of staying in this area is that Haeundae Beach is located towards the end of subway Line 2 in which only a few other areas are classified as “close”, being Gwangalli Beach, Shinsegae Department Store, and Kyungsung University (sort of). The other main areas require a decent subway ride or taxi ride to go and return.

The incredible coastal temple Haedong Yonggungsa is quickly becoming one of the most popular sights. However, it’s quite out of the way, as you have to go on the subway to the terminal station, Jangsan, then take a bus or taxi from there. The temple is sometimes known as the “Sunrise Temple” because people flock here on New Year’s Day to welcome the first sunrise of the year. It’s also a great experience to see the magical sunrise here on any day of the year.

If you want to see the sunrise, you should consider how to get all the way out there early enough to catch the sunrise. If you don’t want to spend the money on a cab, the only other reasonable way that makes sense was to stay overnight nearby. Otherwise, it wouldn’t make any sense to stay way out there while touring.

If you have the time, I recommend walking over to Haedong Yonggunsa the day before in the daylight so that you’ll be able to find it in the dark before sunrise. It’s easy to find, but there are a few different ways to get there.

The isolated upscale resort town along the northeastern coast offers the most exclusive, uninterrupted vacation of your dream in state-of-the-art amenities with a killer view.