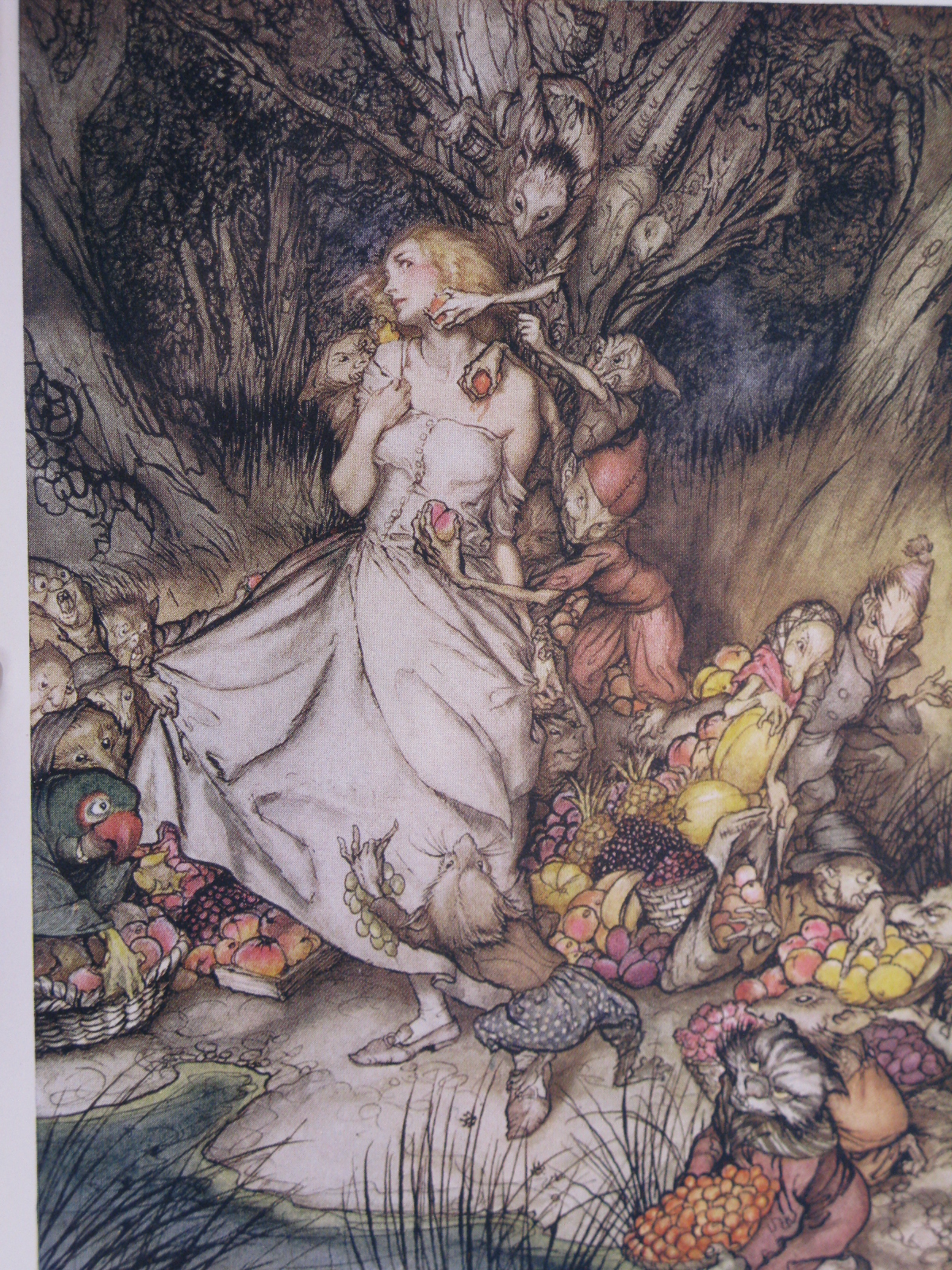 While the definition of sex emanates from the physical genitalia of the existing body, the concept of gender is taught systematically based on sex through social conditions. In “Goblin Market,” Lizzie reminds Laura of female sensitivities and expectations saying, “Dear, you should not stay so late, / Twilight is not good for maidens; / Should not loiter in the glen / In the haunts of goblin men”. Lizzie worries about the goblin men, who eventually tempt and cause Laura’s inebriation, and is also afraid of past experience of Jeanie with the possibility of the same fate befalling Laura. Lizzie asks her sister if she remembers Jeanie and how she too, “Took their gifts both choice and many, / Ate their fruits and wore their flowers.” Jeanie’s infatuation became an obsession as she, “pined and pined away; / Sought them by night and day.” Jeanie’s passing was marked by a mournful and flowerless death. Readers see both Laura and Lizzie’s situation in dramatic irony and Lizzy’s true, sisterly worry. The social expectation of the girls in the poem is to stay in and protect themselves against the “Goblin” men, contrasting their otherwise effective lifestyle.

Through the poem, the speaker believed any other family of Lizzie and Laura to be negligible, yet Lizzie and Laura care for each other as a competent team contrary to popular belief of needing the presence of a father figure. Traditionally, the men were to provide and to protect, however despite the girls’ lack of money, shown when Laura declares to the goblin men, “Good folk, I have no coin,” the sisters protect each other, showing no need for a protector. The girls redefine the traditional lifestyle as a maiden because despite the fact that they were working in the kitchen and, “Talk’d as modest maidens should,” they also, “Fetch’d in honey, milk’d the cows, […] Next churn’d butter, whipp’d up cream, / Fed their poultry,” all tasks of heavy farm work and physical exertion. The girls do accomplish these tasks in the “absence” of the standard male foundation of the house and without the impression of lacking someone. They never question their sexuality or their familial companionship, and Lizzie protects and saves her sister from the seductive fruit, enduring pain and taking control of the situation instead of waiting for else someone.

The structure of the poem itself also makes the moral more readily available for readers to digest. Not only does it have Goblin Men, but it also features an overt and unabashed moral at the end of the poem concerning the most shining kind of friendship: sisterhood. Rossetti utilizes the idea of the “fairy mode,” and “fairy literature,” in which the fantasy setting of her poem took inspiration from The Fairy Mythology. Rossetti uses the structure of the story to fit the audience. The lilting rhyme scheme and fantastical setting make it seem like a children’s story, yet in actuality, the poem is a revolution waiting to happen, an uproar about the independent, nonpartisan nature of humans sans patriarchy wrapped in fantasy, family-friendly presentable rhymes.

Christina Rossetti’s “Goblin Market” took the idea of society and patriarchy and ripped it a new one, by disemboweling the foundation of a society led by men and fed by the phallus. The poem also takes the idea of eroticism, especially homoeroticism as a relationship between the two sisters and forces readers to understand that the bond of sisterhood will outlast and protect rather than sexualize and objectify.